Pete Bissell retires from over 40 years of Winemaking 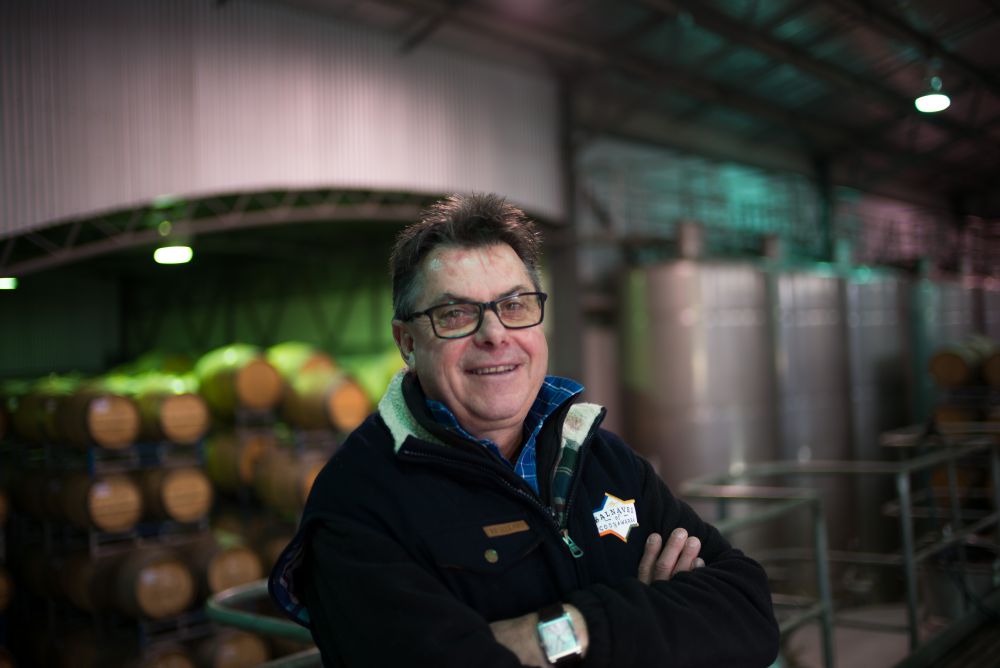 Doug and Annette Balnaves made the decision to start growing grapes in 1976; this was possible when they purchased the land that the winery currently stands on from Doug’s parents who were fine wool producers in the area. In 1990 the decision was made to make the first wines under the Balnaves label designed by Karin Seja at Ian Kidd Design. Soon after, it was obvious that having started the journey of grape growing and winemaking that having their own winery was going to be an important part of the future of the company. Doug and Annette appointed Pete Bissell in 1995 and upon starting at Balnaves, he had the opportunity of every winemakers dream in planning and supervising the construction of a brand new state of the art winery. Pete reflects on the pressure of having this great responsibility “It was a great moment when we won the Camperdown Cellars Best Cabernet Trophy at the Sydney show in 1998, with the Balnaves 1996 Cabernet Sauvignon, the first vintage made through the new winery, we also won the Winestate Cabernet of the Year at the end of 1998.”

With over 30 years of winemaking experience and 25 of those being the senior winemaker at Balnaves of Coonawarra, the winemaking world will be a different place as Pete ventures into his next chapter in life of retirement. Originally from New Zealand, Pete studied and completed his studies at Roseworthy College, South Australia in the late 80’s. While studying he gained experience working in France, and Australian wineries including Mountadam, Lindemans Hunter River, Leo Buring, and Pipers Brook in Tasmania. Pete was appointed winemaker in 1989 working at Wynns Coonawarra Estate as a flying winemaker where he undertook vintages for Penfolds in Russia in 1993 and South of France in 1994.

“I am very grateful to the Balnaves family for the opportunity to initially design and build the winery back in 1996 but also for the 25 years I have spent here, the majority of my career working in Coonawarra and being given the freedom to do experiments, evolve the styles and go in a unique direction.” Pete Bissell.

Vintage 2020 marked Pete’s 32nd Vintage in Coonawarra and 40th vintage in total. Pete leaves the Balnaves of Coonawarra Assistant Winemaker Jacinta Jenkins to take on her new role of Senior Winemaker within the company on July 1st 2020. Jacinta (aka JJ), completed a vintage with Balnaves during her studies at Adelaide University to complete a Post Graduate Diploma of Viticulture & Oenology in 2016. Upon completing her studies, she worked as Assistant Winemaker in the Clare Valley at Pikes Wines before returning to Balnaves as Assistant Winemaker in 2018. JJ has had the advantage of working under one of the best winemakers in the country to learn invaluable knowledge within the winemaking world. She will be lucky enough to have Pete nearby as a mentor, whilst this exciting new chapter starts at Balnaves of Coonawarra.

happy Mother’s Day to all the mums out there- we

Autumn in Coonawarra, how beautiful 🤩 🍁 🍂

Thank you very much to everyone for entering our M

They shall grow not old, as we that are left grow

Did you know... Army biscuits, known as ANZAC waf

🌟 MOTHERS DAY GIVEAWAY 🌟 Go in the draw to

happy Mother’s Day to all the mums out there- we

Autumn in Coonawarra, how beautiful 🤩 🍁 🍂

Thank you very much to everyone for entering our M

They shall grow not old, as we that are left grow

Did you know... Army biscuits, known as ANZAC waf

🌟 MOTHERS DAY GIVEAWAY 🌟 Go in the draw to

Sorry, it looks like we do not support the browser you are using.

We recommend Firefox or Google Chrome.